As a result of New beginnings. , I've demolished my wall and I now want to start a new relationship. I've got a lot of love to give and I want to find that special lady to give it to. Here's the ideal music video.


I won't be blogging so much in future.

She'll be tested again next year. I found out on Wednesday 23rd March that she is being given 5,000iu/day of D3. I didn't expect that to happen.
Posted by Nigel Kinbrum at 9:13 am 12 comments:


Remember Polite Requests? Well, yesterday at mum's nursing home, the nurse in charge called my name. She sounded rather stern, so I thought that I was going to get a slapped wrist for talking too loudly again (as I do, because I'm a bit deaf). But no!

She said that I hadn't done anything wrong. She wanted to talk about mum's Vitamin D blood test result. My eyes lit up. She said that the result had been "temporarily mislaid" (whatever that means), but that they had now found it and it was "normal" at 98nmol/L (RR 50-200nmol/L). Divide by 2.5 to convert into ng/mL. I said that I already knew this as I had spoken to Dr F**'s secretary.

She then said with a smirk "Dr F** knows what you're like (I also smirked) and has agreed that mum can have a serum Vitamin D level of around 125nmol/L. He said to buy some of this." She handed me a piece of paper with the word "cholecalciferol" written on it.

What should have happened: I put my left hand into my right inside jacket pocket and whipped out a tub of Healthy Origins, Vitamin D3, 5,000 IU, 360 Softgels (use discount code NIG935 to get $5 off the first order. Standard shipping $4) with flair and panache.

What actually happened: The pot snagged on something and I had to tug on it for about five seconds to get it out.

I then handed the pot to the nurse and told her to get on with it. Job done! 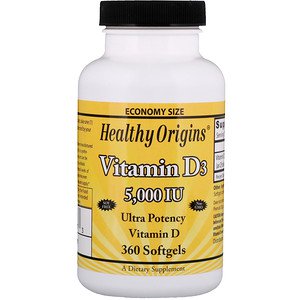