Doctor, every time I do *this*, it hurts!

The correct response is either:-

1) Go to hospital and get that broken finger fixed, or
2) Stop doing *that*!

There seem to be a lot of people out there who are having problems with wheat gluten (gliadin), casein and other proteins. As Matt Lalonde said in The Science Behind the Paleolithic Diet, some proteins are harder to digest than others.

Here's a hard to digest protein:-

It's raw albumin (egg white protein). As mentioned in As sure as Eggs is Eggs....., raw albumin is poorly absorbed, compared to cooked albumin. To digest the above protein requires peptidase enzymes (pepsin, trypsin and chymotrypsin) to break the peptide bonds. This has to be done from the outside inwards, so a large, heavily-folded protein takes a long time to break down into individual amino acids. Cooking albumin changes the 3-D structure - this is called denaturing. Cooked albumin digests much faster than raw albumin, which is why it's much better absorbed. Cooked proteins are generally faster to digest than raw proteins, unless they're burned to a crisp on a barbecue!

In a person with a healthy gut, partially-digested proteins are not absorbed, as the molecules are too large to pass through the tight junctions in the small intestine. They just ferment, producing malodorous wind. In a person with impaired gut permeability, partially-digested proteins pass through the loose junctions and get into the blood, provoking an immune response. This is not good, so Keep 'em tight.

People who suffer ill-effects after eating certain proteins may either have the wrong genes (e.g. coeliac disease), or have impaired gut permeability. The former isn't fixable but the latter may be. In the meantime, if eating "X" hurts, don't eat "X"!
Posted by Nigel Kinbrum at 1:07 pm 5 comments:


I'm writing this post lounging like a lounge-lizard on a comfy three-seater sofa. When I'm driving from A to B, I'm sitting in a comfy chair. Basically, I have a cushy life. I go for a walk in the evenings and I go to many music events, but as I'm (a bit of) an information junkie, I spend many happy hours on-line, lounging on my sofa. My bad.

Thanks to technology and energy, many of us have labour-saving devices and horseless carriages. Therefore, many of us don't burn much energy from doing hard physical work and from having to walk everywhere.

Therefore, to maintain energy balance, many of us have to eat little food energy to maintain a reasonable weight and body composition. To get all of the vitamins*, minerals, fibre/fiber etc required for good health from little food energy requires the consumption of foods with high nutrient densities. You know where this is going, don't you?

*Except for Vitamin D, which requires sensible sun exposure between the end of March and the end of September when your shadow is shorter than you are.

If you enjoy irony, see What Did You Expect? Coca-Cola's Newest Anti-Obesity Ad Blames Chairs, Not Coke.

Use and abuse of technology and energy.

Take a look at the picture below (hat-tip to Beth Mazur).

Using technology and energy: Produce are turned into crap-in-a-bag/box/bottle (CIAB). The latter cost more than the former but are worth less, as nutritional value has been reduced. Creating CIAB creates wealth but decreases value.

Musings on the Paleo Diet.

Would you ask the man below for advice on how to give up alcohol? 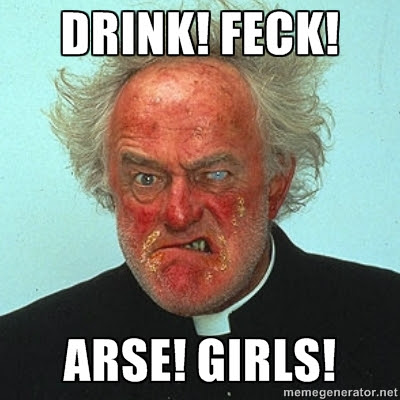 The Paleo Diet gets flak from scientists like Marlene Zuk and Christina Warinner and it was criticised in The Paleo Diet (hat-tip to Melissa McEwen).

The thing is that people don't need to eat a Palaeolithic diet to be 90% free from degenerative diseases. A mere 150 years ago, Mid-Victorian Brits who didn't die in childhood managed to live to a ripe old age, as cheap sugar imports, junk food, labour-saving devices and horseless carriages hadn't yet been invented.

Everyone is Different, Part 3.

Cont'd from Everyone is Different, Part 2.

Hat-tip to Bill Lagakos, whose article Missing: 300 kilocalories reminded me of the following graphic from Effects of Dietary Composition During Weight Loss Maintenance: A Controlled Feeding Study. 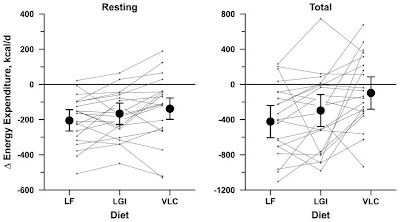 Lo and behold, even when subjects are bribed to stick to the diets that they are provided with, the effect of eating those diets varies hugely.

Everyone is different for a number of reasons, some of which are unchangeable and some of which are changeable. We can't change our birth weight, what our mums ate when we were in the womb or the chemicals that we were exposed to in the past. We can't change our genes, but we can change the expression of our genes by changing diet, activity and even supplementation. See Influence of Vitamin D Status and Vitamin D3 Supplementation on Genome Wide Expression of White Blood Cells: A Randomized Double-Blind Clinical Trial.

Continued on Bray et al shows that a calorie *is* a calorie (where weight is concerned)
Posted by Nigel Kinbrum at 12:10 pm 14 comments:

See also Who Lives Longest? (h/t to Melissa McEwen)
Posted by Nigel Kinbrum at 11:24 am 6 comments:

Everyone is Different, Part 2.

Cont'd from We are not all the same.


I learned that Everyone is Different, thanks to a study by Julia H. Goedecke, Alan St Clair Gibson, Liesl Grobler, Malcolm Collins, Timothy D. Noakes and Estelle V. Lambert.

Well, stone the flamin' crows! Timothy D. Noakes' name just popped up in Alan Aragon's article 2013 NSCA Personal Trainers Conference: Looking Back at my Debate with Dr. Jeff Volek. Dr. Noakes has had problems with his blood glucose level and has adopted a very-low-carb/ketogenic diet.

What also caught my eye in Alan Aragon's article was (Note: TTE = Time To Exhaustion):-
"However, the authors’ conclusion is misleading since 2 of the 5 subjects experienced substantial drops in endurance capacity (48 and 51-minute declines in TTE, to be exact). One of the subjects had a freakishly high 84-minute increase in TTE, while the other increases were 3 and 30 minutes."

Also note that sprint capability...remained constrained during the period of carbohydrate restriction. As mentioned in It's all in a day's work (as measured in Joules), exercise above a certain intensity (~85%VO2max) burns significant amounts of carbs, no matter how fat-adapted someone is.

Cont'd on Everyone is Different, Part 3.
Posted by Nigel Kinbrum at 1:59 pm 17 comments:

Nothing to report, so...

...here's a YouTube video of me singing "The time of my life" by Bill Medley & Jennifer Warnes, backed by Jukebox at the Falkners Arms in Fleet on 1st February 2013.

EDIT: As the old video got deleted, I have replaced it with one produced on 5th February 2014 at the Tickled Ivory Piano Bar in Guildford.

Posted by Nigel Kinbrum at 11:03 pm No comments: