On burning, storing and recomposing.


On my adventures around the interwebs, I've noticed the following:- "Humans aren't Calorimeters. Therefore calories are irrelevant to humans." While I agree with the first sentence, I don't agree with the second one.

As both oxygen & carbon dioxide are gases, these can be measured by a respiratory gas analyser, to establish the rate of burning and what's being burned at any instant. See It's all in a day's work (as measured in Joules). When resting, burning occurs at a rate of ~1kcal/minute and, as it's measured while fasted, ~0.11g/min of fat is burned, & ~0.01g/min of carbohydrate is burned. Also note that a lot of mechanical energy can be produced, which can increase the rate of burning by a factor of seventeen.

In conclusion, humans burn (oxidise) foods, though not with a flame, and they can produce mechanical energy in addition to heat energy. The rate of burning and what's being burned at any instant can be measured.

When we eat food, it's digested and absorbed. As a digested meal is absorbed, it appears in the blood as glucose, triglycerides & amino acids. These then disappear from the blood due to burning and storage.

Therefore, ~1kcal/minute resting burning rate is derived ~100% from carbohydrate. Therefore, carbohydrate-burning rate is ~0.25g/min. At this rate, it would take ~400 minutes to burn 100g of glucose. If less than 100% of energy is derived from carbohydrate, it would take longer. However, it actually takes ~180 minutes for blood glucose level to fall from maximum to minimum. Therefore, some glucose from the Oral Glucose load is stored (mostly as glycogen in muscles and liver).

Therefore, fat-burning rate is ~0.11g/min. At this rate, it would take ~364 minutes to burn 40g of fat. If less than 100% of energy is derived from fat, it would take longer. Everyone is Different. shows the variation in % of energy from fat at rest. However, it actually takes 180 to 240 minutes for blood triglyceride (fat) level to fall from maximum to minimum. Therefore, some fat from the Oral Fat load is stored (as fat in adipocytes), even though there is no significant insulin response.

It's therefore possible to increase muscle mass at certain times and decrease fat mass at other times, while keeping overall mass relatively constant i.e. it's possible to gain muscle and lose body-fat without being in an overall caloric deficit.

Not exactly rocket science, is it?

The paleo diet was recently ridiculed as a food fad in Natural’s Not In It. It also came last in a US News Best Diets survey.

Ways of eating such as very-low-carbohydrate, low-carbohydrate, low-reward, paleo, primal, ancestral, just eat real food etc discourage the consumption of manufactured food products and encourage the consumption of produce. If a large percentage of the population stop filling their shopping baskets with manufactured food products and start filling them with produce, who suffers? Not exactly...

This is why the food manufacturing industry tries to ensure that the population gets the best nutritional and dietetic advice that money can buy. See also New study: Big Food’s ties to Registered Dietitians.

While libertarians and anarchists moan about freedom from government interference, the food manufacturing industry has the freedom to crap all over the aforementioned diets and influence people to buy manufactured food products. Morbidity is also very profitable for healthcare and drug companies.

I think that I've now flogged this particular horse to death!
Posted by Nigel Kinbrum at 4:33 pm 1 comment:

I thought I'd mark my return to blogging by taking the piss out of a certain Diet Doctor for his post It’s the Insulin, Stupid, who takes (and tweaks) Fig 7A from Hyperinsulinemia Drives Diet-Induced Obesity Independently of Brain Insulin Production.

At first glance, Fig 7A looks like a CIH believer's dream come true (apart from the words "High Fat Diet"). 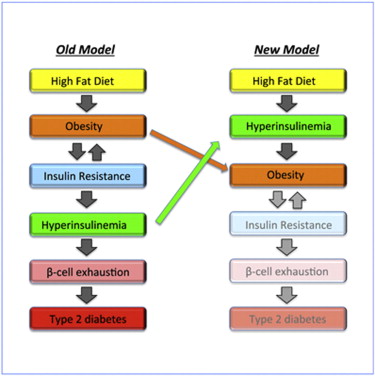 Obesity is caused by too much insulin. Game, Set and Match to insulin. 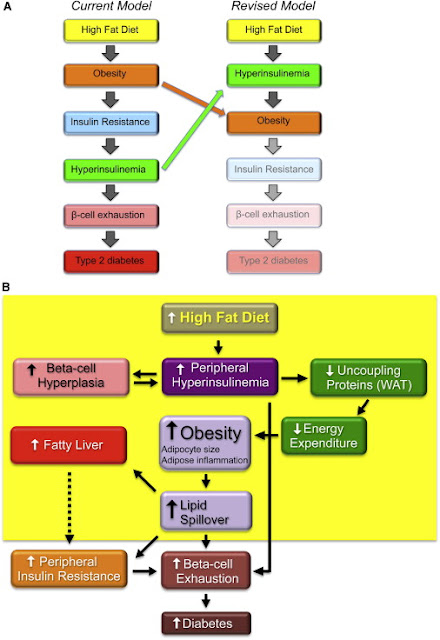 Figure 7. Revisiting the Current Model of Obesity and Type 2 Diabetes(A) The most widely accepted model of the pathogenesis of obesity and type 2 diabetes posits that a high-fat diet leads to obesity and insulin resistance (there is debate about the relative order and causality of these). In this widely held view, insulin resistance then leads to hyperinsulinemia, which is followed by β cell exhaustion, and then type 2 diabetes. The accepted model is incompatible with our results that put the insulin hypersecretion genetically upstream of obesity.(B) Our data support a model whereby insulin levels must be kept low to maintain energy expenditure in white adipose tissue via the expression of Ucp1. Our data do not address the order of subsequent events after obesity (outside the yellow box), such as insulin resistance and/or type 2 diabetes, since they were not observed in our studies. In other words, the effects of insulin gene dosage on obesity are independent of sustained changes in glucose homeostasis or insulin resistance.

I'm not an insulin denier as is obvious from my other blog posts. I'm still restricting my carbohydrate intake to ~125g/day from whole foods.

This post will probably annoy some people. Before wasting your time writing a comment, please read my Moderation Policy.
Posted by Nigel Kinbrum at 4:14 pm 44 comments: