A complication of Psoriasis is Psoriatic arthritis. The picture below shows what can happen to the feet, toes & toenails. Mine are nowhere near that bad.

From Signs and symptoms:
"Pain, swelling, or stiffness in one or more joints is commonly present in psoriatic arthritis.[4] Psoriatic arthritis is inflammatory, and affected joints are generally red or warm to the touch.[4] Asymmetrical oligoarthritis, defined as inflammation affecting one to four joints during the first six months of disease, is present in 70% of cases."

This is the form that I have, affecting my left shoulder, right hip & right knee, joints that have been damaged over the years. I recently reduced the pain and inflammation in these joints by doubling my intake of EPA & DHA by eating two cans/day of Tesco Mackerel in spicy sauce, instead of one. Unfortunately, the improvement didn't last, so I'm back to one can/day.

EDIT: I'm back to two cans/day of https://www.tesco.com/groceries/en-GB/products/258574414 (the Mackerel changed to one with lower EPA & DHA content), and my mood is a bit better. I've also added 600mg/day of soluble Aspirin (dissolved in the Epsom Salts solution) as it's anti-inflammatory and my stomach can tolerate that dose.

Occasionally (when high temperatures make me feel ill), my hands & feet on the left side of my body swell, causing "sausage-fingers & sausage-toes". The reason why only the left side of my body's affected is because the heart pumps more to the left than to the right (according to my GP). One solution to this is to stop the heart from pumping so fast & hard when feeling ill by taking a β1 receptor antagonist (a.k.a. beta blocker) e.g. Atenolol. As I'm using Atenolol off-label, I get them on-line.

I completely suppressed my skin rashes and plaques since 2007, by supplementing with 5,000iu/day of Vitamin D3, ~3g/day of EPA & DHA from Sardines/Mackerel & ~400mg/day of Mg from ~4g/day of Epsom Salts spread out over my waking hours.

However, there's this (emphasis, mine):-
"Along with the above-noted pain and inflammation, there is extreme exhaustion that does not go away with adequate rest. The exhaustion may last for days or weeks without abatement."

I'm lucky in that the exhaustion isn't extreme, but it is significant and it coincides with high temperatures. Since I wrote this, I've lost 10kg and now feel slightly better in high temperatures. On the minus side, pub chairs are much less comfortable and Winter feels colder!
Posted by Nigel Kinbrum at 5:03 pm 1 comment:

I was eating one can/day of Tesco Mackerel in Curry, Mexican, Thai Green & Sweet Chilli sauces:-

Mackerel is very high in the long-chain omega 3 polyunsaturates EPA & DHA. It also has a strong flavour, so I get it in strongly-flavoured spicy sauces. It goes nicely with a can of Tesco Everyday Value Sweetcorn 325G

One Sunday night, I got home from the Ploughdium jam and felt hungry, so I had another can of Mackerel bringing the total to two cans that day.

The next day, I was walking to Short & Sweet coffee shop for my brunch, when I noticed that I'd lost something - the pain in my right hip! The second can had raised my intake of Mackerel-sourced omega-3 fats from an average of 3.5g to 7g! Omega-3 fats are anti-inflammatory.

Why excessively-rapid weight loss due to starvation diets is bad.

Nearly 10 years ago, I wrote Everyone is Different. Back then, I warned about excessively-rapid weight loss, as catabolising muscle results in 5.8 times faster weight loss than losing bodyfat alone.

Recently, I was directed towards the following two studies with very similar titles:-
Change in Body Composition during a Weight Loss Trial in Obese Adolescents
&
Changes in Body Composition During Weight Reduction in Obesity: Balance Studies Comparing Effects of Fasting and a Ketogenic Diet

In the first study, the following string of text stood out:- "Although absolute LM increased in boys and decreased in girls.." Boys gained absolute lean mass and girls lost absolute lean mass. Teenage boys have much higher testosterone levels than teenage girls. Ditto for men & women.

In the second study, the full version is behind a pay-wall. There are ways to bypass pay-walls, but they're illegal, so I'm not going to include a link to the full version. I took a couple of screen-shots instead. 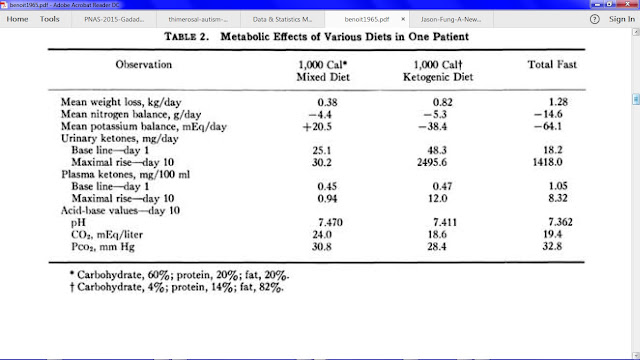 3. 0kcal/day total fast resulted in a total weight loss of 12.8kg (1.28kg/day or 2.816lb/day), of which 3.4kg was bodyfat and 6.2kg was LBM. The rest was glycogen+water loss. Mean potassium balance was very negative, so there was a large net loss of LBM. 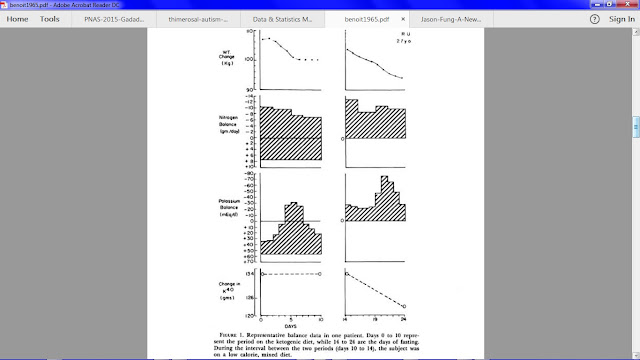 Can you spot what's going on with the Nutritional Ketosis diet? The 14%P made me suspicious, as it seemed unnecessarily precise. There's a reason for that!

At the end of day 4, weight loss due to glycogen+water depletion is starting to slow down as glycogen becomes exhausted, then it speeds up again because falling blood glucose level (to ~3.3mmol/L) stimulates the pituitary gland to secrete ACTH, which stimulates the adrenal cortex to secrete cortisol, which catabolises muscle into amino acids for the liver & kidneys to use for gluconeogenesis. This speeds up the rate of weight loss for 3 days.

From Circulating Nutrients in Starvation, here's the Figure. 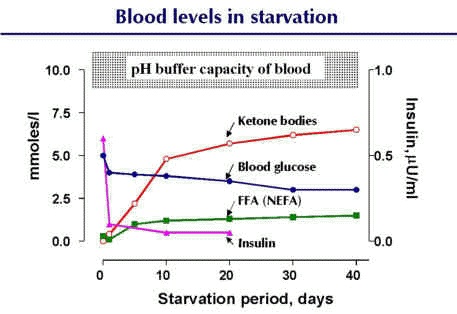 "Ketone bodies" level rises linearly from near zero to 5mmol/L by day 10 in fasting. It may rise faster on Nutritional Ketosis. As ketone level rises, glucose consumption by the various tissues falls. This is why muscle catabolism stops after 3 days - there's now sufficient dietary protein to supply the amount of glucose needed, by gluconeogenesis.

In females, muscle mass is like a bargain at Tesco - When it's gone, it's gone. So please don't do excessively-rapid weight loss diets and/or not eat for more than 48 hours.

There's only one safe rapid fat loss diet and it's The Protein-Sparing Modified Fast (PSMF).
Posted by Nigel Kinbrum at 6:54 pm No comments: