2011 is nearly here, so here's a quick post before I go off and start celebrating.

1) Mum: She had a good Christmas at Acacia Lodge. She even got a visit from Jenny Wood, Mayor of Henley! 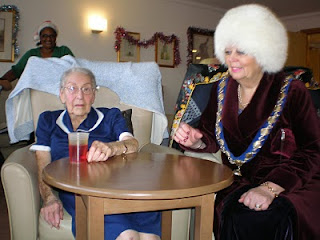 2) Computers: I've been doing a spot of housekeeping on my lap-top as there were some start-up errors in the System Log.

It turns out that Microsoft had screwed-up. The Driver Protection feature in Microsoft Windows XP Professional Service Pack 1 (SP1) prevents the operating system from loading drivers that are known to cause stability problems (for example, preventing Windows XP from booting). However, the XP Registry still contained entries for the removed drivers so the operating system couldn't find them, causing errors. Editing the Registry using regedt32.exe to remove the keys that pointed to the missing drivers fixed the problem. There were still start-up errors, though.

It wasn't just Microsoft that had screwed-up. The Registry was full of keys belonging to programs that I had uninstalled. National Instruments LabView left loads of spurious keys. Virgin PCguard left over 1,000 spurious keys relating to virus pattern updates. If I'd known that there was so much crap to clean out, I would have used a free Registry Manager!
Posted by Nigel Kinbrum at 5:51 pm

Email ThisBlogThis!Share to TwitterShare to FacebookShare to Pinterest
Labels: Computers