I got an invitation to a party at mum's care home today. 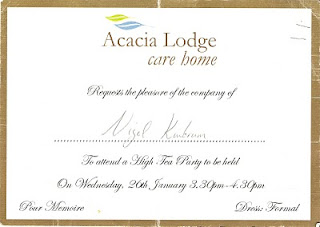 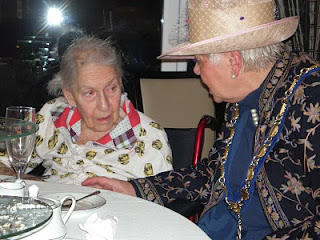 Mum's hair was a little dishevelled due to her putting a cloth napkin on her head earlier, when there was a cold draught coming through a nearby window.

I was suited and booted with a dicky bow and got too hot. In retrospect, doing Zumba the night before wasn't a good idea!

During the high tea, I fed mum on strawberries & cream. She stayed wide awake and alert throughout the do. The lady to my left was overweight & type 2 diabetic but was fed sandwiches & cakes(!) Suffice it to say that she went into a hyperinsulinaemic sleep and was almost completely uncommunicative when her nephew & niece arrived.

I was bit naughty food-wise and I also had a glass of Champagne which went straight to my head, making me quite merry. I went for a walk to the local Car Service Workshop to clear my head and pay the bill for the repair of mum's car (it needed a new distributor and timing belt as the distributor was knackered and the old timing belt was nearly 13 years old).

For "supper", I gave mum a chopped banana with cream. She was not only wide awake, but talking and making some sense! I started to flag a bit and a lady told me that I looked tired and should go home, so I did. I kept myself alert during the 45 minute drive home by blasting myself with freezing air and playing "Duke" by Genesis at high volume with the window down!
Posted by Nigel Kinbrum at 10:01 pm

Email ThisBlogThis!Share to TwitterShare to FacebookShare to Pinterest
Labels: Random

So really, your just another of those hooligans who drive around with their music on full blast and windows wide open. :)

Good to hear your Mum is well.