The answer is "It depends!". 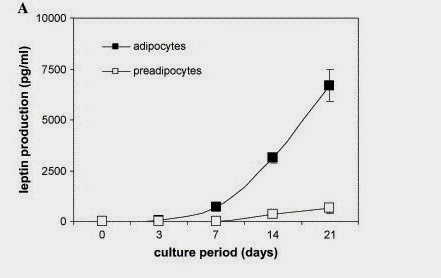 The above plot is from Fig. 4 of Cytokine-mediated modulation of leptin and adiponectin secretion during in vitro adipogenesis: Evidence that tumor necrosis factor-α- and interleukin-1β-treated human preadipocytes are potent leptin producers and shows that leptin secretion from adipocytes increases non-linearly with increasing culture period.

If adipocytes become full due to a chronic caloric excess, there are two possibilities.

1a: If there is continued caloric excess, no preadipocytes are converted into adipocytes. There is no additional storage capacity available for excess nutrients, so they remain in circulation. T2DM has developed = bad.

1b: If there is subsequent caloric deficit, adipocytes start to deplete, storage capacity becomes available and T2DM goes away (if beta cells haven't been destroyed). The low number of fairly full adipocytes secrete sufficient leptin, so metabolic rate is high and hunger is low = good.
EDIT: This is the principle behind the DiRECT protocol.

2a: If there is continued caloric excess, pre-adipocytes are converted into adipocytes. This is adipocyte hyperplasia. There is additional storage capacity available for excess nutrients, so T2DM doesn't develop = good.

See Beradinelli-Seip Syndrome – stick that in your pipe and smoke it and read the comments to see why adults with insufficient adipocytes are highly likely to develop T2DM. This is why Asians who remain skinny in childhood (so have no adipocyte hyperplasia) have a high risk of developing T2DM. Sumo wrestlers are Asians who become fat in childhood (so they have a lot of adipocyte hyperplasia) so they have a lower risk of developing T2DM.

According to Adipocyte Turnover: Relevance to Human Adipose Tissue Morphology:-
"Occurrence of hyperplasia (negative morphology value) or hypertrophy (positive morphology value) was independent of sex and body weight but correlated with fasting plasma insulin levels and insulin sensitivity, independent of adipocyte volume (β-coefficient = 0.3, P < 0.0001). Total adipocyte number and morphology were negatively related (r = −0.66); i.e., the total adipocyte number was greatest in pronounced hyperplasia and smallest in pronounced hypertrophy. The absolute number of new adipocytes generated each year was 70% lower (P < 0.001) in hypertrophy than in hyperplasia, and individual values for adipocyte generation and morphology were strongly related (r = 0.7, P < 0.001). The relative death rate (∼10% per year) or mean age of adipocytes (∼10 years) was not correlated with morphology."

If you want to remain slim, high fasting serum insulin due to hepatic and/or muscular insulin resistance and/or chronic overconsumption is bad.
Posted by Nigel Kinbrum at 12:41 pm

Carbsane doesn't believe in adipocyte hyperplasia in adults, but I tend to agree with you that it explains a lot about the formerly obese. Now if we can just find find the homeostatic defect that causes weight gain in the first place...

(As one who ate all the CIAB I could hold in an attempt to GAIN weight unsuccesfully and who never found the consumption of food to be pleasurable, I don't think your CIAB availability/advertising explains my sudden weight gain at age 45. But perhaps that's when the tapeworm died or something:-))32 stystec

I don't think that there is a the, where homoeostatic defects are concerned.

At 45, I had to quit running marathons because it was ruining my spine. That explains a reduced CO, but since I was totally sedentary until age 35 and unable to gain weight, I don't know why the homeostatic mechanism didn't compensate at 45. I was skinny as a rail, so my fat hormones wouldn't have changed.

I know, middle age and all that, plus if we truly knew the answer, we'd be rich! But it's all weirdly similar to the national sudden obesity epidemic. Methinks Big Ag must be putting something in my veggies. (Just kidding, of course:-))

It's possible that marathon running slowly reduced your muscle mass & BMR (due to high cortisol) but your weight remained stable due to increased CO from TEA. Stopping marathon running reduced TEA to zero. Once you start marathon running, you can't stop! Is your spine up to speed-walking?

I'm not built for running (long, heavy torso + short legs which hurts my joints), so I won't start.

After I'd put on 20 pounds, I replaced running with serious biking (600 kcal a day). Didn't help, I apparently just ate more. Now I do HIIT twice a week, strength train twice a week, have more muscle than at anytime in my life, eat whole foods, and can't lose any fat without a lot of hunger.

I think it's the same story with most people who are gaining or regaining fat. While you are right that we are all different, I suspect some THING may also be different (vs my former self)

I've wasted enough of your time for now. I'll let you know if I ever find the defective mechanism.

@PD, I don't know that I've ever stated that I don't believe in hyperplasia. Certainly I do. It is "generally thought" that adipocyte cell number is determined by around ate 16-20. But, for example, in my own personal case, I find it difficult to believe I only have the same number of cells as when I was 16 that are just stuffed full. However if the number can change, I think it makes sense this would occur both ways. That after substantial weight loss, over time, fewer pre-adipocytes are differentiated to replace as older ones die off.

To be fair, PD wrote...
"Carbsane doesn't believe in adipocyte hyperplasia in adults..."

How long do adipocytes live for? I had a feeling that it was near as damn-it forever!

I hope that my assumption of contents being proportional to culture period is more or less correct.

Sorry ... guess I'm not reading too carefully this past day or so. Lots of other stuff fuzzin the mind.

Evelyn: A fuzzy mind is my normal state! I did manage to find what prompted my original statement: Fat Tissue Expansion: Part III - Fat Cell Number. "Adipocyte number is established by some time in our mid-to-late teens and you're stuck with what you get." What I could NOT find was the original study showing that number increased significantly starting at about the point of clinical obesity. I also seem to remember a "death rate" (apoptosis?) of about 10% a year, thus requiring a long period before normality for anyone once significantly obese.
I realize such studies are not as simple as they may sound because adipocyte hyperplasia can vary greatly by body location, but I think Nigel's ideas in this blog post certainly deserve consideration.

I agree! I just sent Nige the full text (if you want it, shoot me an email). I've also got some more that have been in the hopper for that Fat Tissue Expansion series for a while. I'll try and stash them in the library at least for now when I get a chance :)

The current state of the science seems to favor fixed cell number in adulthood. But I don't know that they've ever tested cell number before & after either going from lean to obese or obese to lean.

One thing against those who've lost considerable fat may be that that plethora of old cells just hangs on longer and there's already enough cells around to handle the smaller load so newer ones aren't matured as quickly. That sounds plausible at least. So you have older cells perhaps sending out all manner of signals as if they were still filled up and big ... dunno.

My search for the definitive study is still in vain. However I did find the following in vivo, human, study which indicates what I remember reading: Harmelen, et al. 2003, Effect of BMI and age on adipose tissue cellularity and differentiation capacity in women.
The authors state that volume precedes number during the development of obesity and that a critical size becomes the trigger for hyperplasia.
I also found a reference to the 10% death rate or more precisely 10yr average life span, but it probably isn't worth all the 1 finger typing I'd have to do on this tablet (lousy cut and paste capability).

FWIW, Insatiable hunger has not been the cause of my regains in the past. I'd also point out that, however erratically, Jimmy Moore maintained most of his 180 lb weight loss through 2009. That his fat cells might now be mounting a mutiny seems unlikely. According to the NWCR, after the 3 year mark it becomes easier. I dunno. I certainly don't have all the answers!

I trust nobody here is depending on the 1970s studies in rodents?

Are there reasons that Nigel's 2b) scenario wouldn't hold up?

One thing we probably all agree on is not to let my pre-teen become obese!

"One thing we probably all agree on is not to let my pre-teen become obese!"
Hear-hear!

I would agree with this nigel.

Hello, and thanks for dropping in. I'm out, so I'll be brief. The two cases I gave were extremes. In the real world, somebody may have limited hyperplasia. The fact that some people develop T2DM when they get fat indicates that they have run out of storage capacity.

Hi Nigel, you seem to be inactive for a while. I enjoy reading your posts and comments and I have learned from them. Hope you are doing Ok.

I'm taking an indefinite break from blogging, for personal reasons.

ItsTheWooo • 2 years ago said...
I would agree with this nigel.